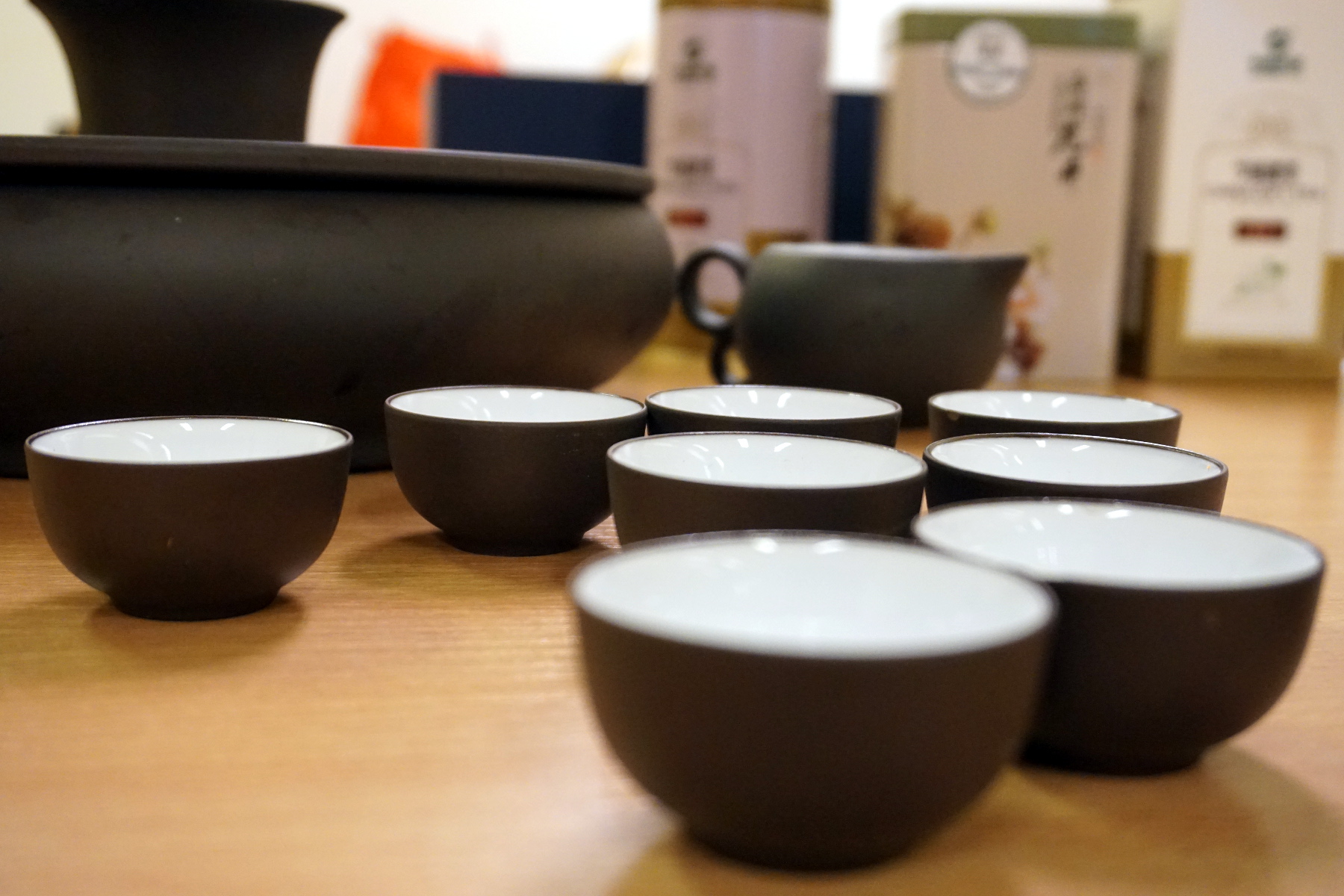 December 15 is the International Tea Day. It is therefore a great opportunity to talk about the tea. And this time I would like to say few words about the Chinese tea. I am about to show you three teas, considered to be the most important by my friends from China who practise the art of tea. In their opinion, those three kinds of tea are perfect for one to start his or hers adventure with Chinese tea.

Chinese art of tea, cháyì (茶艺), including the tradition of multiple tea brewing – so-called gōngfū chá (工夫茶) is different from sadō, the Japanese way of tea. The teahouses or tearooms in China also do not resemble tea pavilions that I know from Japan. And although Japanese traditions are definitely more familiar to me* and two of my most favorite teas are Japanese gyokuro (a kind of sencha) and hōjicha, I must admit that the Chinese and Taiwanese wūlóng tea (known better as oolong) I think for equally great. Interestingly, for the first time ever, I’ve tried the real wūlóng tea in Japan, where it is called ūron.

*) Read my impressions on the Japanese tea ceremony I participated in Himeji, Japan.

In the following paragraphs, I explain briefly what characterized the so called “blue” oolong tea, and further I describe a certain, very famous variant of it – Da Hong Pao. Then I talk about two unique green teas – Longjing and Xinyang Maojian. All mentioned teas belong to the so-called ten of China’s most famous teas *. I had the pleasure of tasting all three of them. My Chinese friends prepared it in accordance with the gōngfū traditions. And all three teas tasted amazing.

Oolong or wulong is a kind of semi-fermented tea. It is grown in the Chinese provinces of Fujian and Guangdong as well as in the north and north-east of Taiwan.

Its production (in a simplification) includes the stage of wilting of leaves under the influence of strong insolation and the oxidation stage (before rolling up the leaves). The degree of oxidation of oolong tea can vary. My friends have indicated that it can even be between 8 and 85% depending on the type of tea and the details of the production process. For the same reasons, oolong tea can also vary greatly in terms of taste. They oolong teas can have sweet, fruity taste and aroma of honey, wood or very fresh leaves. You may find the oolong tea also under such names as “blue tea”, “turquoise tea” or “emerald tea”. The literal translation of the Chinese name (wūlóng) is the “black dragon”.

One of the most outstanding oolongs are Wǔyí yán chá, the teas from the Wuyi mountains. The Da Hong Pao is one of the most famous tea from that area.

Da Hong Pao is highly oxidized (in about 60%), dark oolong tea. Originally it comes from tea treas grown on the rocky slopes of the mentioned Wuyi mountains (Wǔyí Shān) in south-eastern China (now on the border between Fujian and Jiangxi provinces.). Experts sense in the infusions of Da Hong Pao mineral and floral flavors.

Da Hong Pao is one of the most famous and appreciated teas in the world. It reaches dizzying prices (up to 1 million dollars per kilogram), although it is also available in much cheaper variants. In ancient China people called it the “king of teas”, although its name in the literal translation is “a great red robe”. Why does it have such a weird name?

According to legend, the mother of one of the Emperors of the Ming Dynasty has been cured of an unknown disease by means of a tea infusion. Due to this happy ending, the emperor decided to honor the tea trees from which healing leaves came from. He sent high-quality red robes to decorate these trees. It was four trees growing on the rocks of Wuyi. The Chinese claim that six very old trees (allegedly planted during the Song Dynasty, i.e. between the 10th and 13th centuries) remain to the present day surrounded by great respect and cult. This is why only the most honorable guests are served with Da Hong Pao tea.

Longjing tea is a variety of green roasted tea from the vicinity of Hangzou (Zhejiang province) where it has been grown and harvested by hand for 1700 years. It is one of the oldest and most traditional Chinese teas. Longjing aroma is very mild. Due to the delicate taste and aroma it is a good tea for people who are not familiar with the Chinese tea tradition.

The literal translation of Lóngjǐng is a “dragon well”. I know two stories that are to explain the genesis of this name. The first says that the name was given to the tea, because its leaves during the brewing swing in the water in a way that the Chinese associate with the movements of the dragon. The second explanation speaks of the well of Lóngjǐng, in which “thick water” was gathering. When it rained, the lighter rainwater did not mix with the water from the well, only floated and waved on its surface – also reminding the Chinese people the movements of the dragon. And apparently those people named the locally grown tea after the mysterious well.

The leaves of Longjing tea are roasted in hot dishes just after harvest – at the very beginning of the processing. This is the case with many Chinese green and white teas, because heating stops their natural oxidation. (Which in turn is the basic process in the production of black tea and oolong tea.)

Xinyang Maojian is green tea from the Xinyang area (Henan province). This is another of the high class Chinese teas. Its history dates back to 2,300 years ago. For instance, they have found this particular tea in the ancient tombs in near Xinyang.

Xinyang Maojian tea is famous for its exceptionally refreshing taste and aroma (often associated with flowers) and a characteristic yellowish color of infusion. The leaves of Xinyang Maojian are dark green, thin and covered with white hairs (see photo), which actually influenced the name of the tea. Māojiān means more or less “hairy tips of sharp leaves”. The other name of this tea is Maofeng (毛峰) tea.

Xinyang Maojian gets its taste thanks to the exceptional geographical and climatic conditions of Xinyang. Tea trees grow at high altitudes (Mt Cheyun, Mt Jiyun, Mt Tianyun). There is a clear division into four seasons there. Also very good humidity is ensured. All this makes the tea has perfect conditions for growth.

Above I described three teas, which my Chinese friends recommend to start the cháyì adventure with. But every Chinese tea is noteworthy. One need remember though,  that each type of tea regards the proper temperature of brewing. This is a way to get the best out of the tea. As for me – I want to try as many Chinese teas as possible. In my opinion this is a very important aspect of tasting Asia!  (Remember the name of my blog?!) For sure I would like to try every tea recognized as the most famous Chinese teas.

The most famous Chinese teas… I tried to reach the original list of “The 10 Most Famous Teas of China” (published in the eighties). Unfortunately, the longer I searched, the more different lists I found. My Chinese is not so advanced that I can search for information in Chinese-language sources. So I decided to quote a list of the Tea Wiki, which – as the authors claim – is also a compilation. Nevertheless, it is a good start for further exploration. 6/10 teas from this list are the green teas, but remember that Chinese tea is not always green!